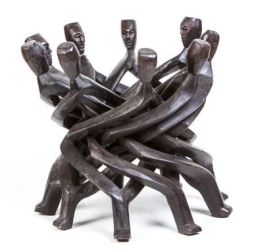 Should experiences of Black women be the grounds for knowledge claims when studying and theorising about Black women? I imagine many would say yes, however, as Patricia Hill Collins points out, that hasn’t been the case. We often have two inadequate perspectives on offer for studying consciousness of an oppressed group. Either these groups identify with the oppressor, in which case they lack an independent interpretation of their own oppression, or they are seen as less human than their oppressors, in which case they lack the capacity to articulate their own standpoint. In the first case, independent consciousness is seen not as their own, while in the latter, consciousness of the oppressed group is seen as inferior. In ‘The social construction of black feminist thought’ Collins argues for the need for an alternative epistemological stance that reflects Black women’s standpoints.

Collins rejects both perspectives and asserts that Black women have been neither passive victims nor willing complies of, what she calls, the dominant ‘Eurocentric masculinist epistemology’. She traces its origins in Western elite white male structures of knowledge foundation, where Black women’s experiences with work, family, motherhood, and sexual politics have routinely been distorted or excluded from traditional academic discourse and from what counts as valid knowledge. This exclusion from the mainstream epistemology has led to what Collins calls ‘subjugated knowledge’ – expressions of experience through other forms such as music and dance.

For Collins, as for many feminist standpoint theorists, ‘all social thought reflects the interest and standpoint of its creator’ and political criteria influence the knowledge validation process. Knowledge is evaluated by a community of experts that represent the standpoint of the groups from which they originate. Credibility is thereby maintained as defined by the group from where the basic knowledge is drawn. This  alienates alternative standpoints as anomalies. Since Western structures of knowledge foundation have been controlled mainly by elite white men*, the dominant epistemologies reflect interests and views of that group while other views are systematically distorted.

This dominant, white male controlled knowledge validation process, which Collins closely associates with positivist** epistemology, suppresses Black feminist thought on the grounds that it is not credible research – for new knowledge claims must be consistent with existing bodies of knowledge that the dominant group accepts true. Thoughts that challenge the inferiority of Black women are unlikely to be generated. Such thoughts reveal the white male controlled academic community’s inadequacies and its lack of familiarity with Black women’s reality. Expressing an independent Black feminist consciousness, therefore, becomes problematic, as it is a threat to the established interpretation of reality.

Black women who achieve academic credentials face pressure from multiple sides. They must navigate between two conflicting epistemologies – representing white male interest on the one hand, and Black female interest on the other. These scholars must constantly translate and move back and forth between these two frameworks. Those who accept such institutional assumptions are rewarded, but often at a personal cost and those that challenge such assumptions face the risk of being ostracized.

Given that ‘reality is experienced differently by different groups’ is at the heart of Collins’s argument, it is no surprise that she rejects positivism as an appropriate epistemological framework to study Black women’s experience. Positivist approaches, in their strive to produce objective generalizations, fail to acknowledge that researchers have values, experiences, and emotions. She asserts, “genuine science is unattainable unless all human characteristics, except rationality, are eliminated from the research process”. I am sympathetic to Collins’s position on positivism. The very idea of “genuine science”, not only whether it is attainable, is questionable – well, at least as far as humans are the centre of enquiry. In its desire to be objective and value-free, science often makes the scientist invisible. As ideal as this may sound, it is an unobtainable utopia. There is no such thing as ‘a view from nowhere’ and science and scientists are not immune from this. The methods the scientist chooses to investigate certain phenomena (and by implication those she chooses to ignore) and the way research questions are framed, for example, affect the kind of knowledge produced. Instead of making the scientist invisible and attempt to eliminate human characteristics from the research process, science might be better-off acknowledging that science is a human endeavour. As such, passions, values, and situatedness in certain historical and cultural discourse, among many other factors, are likely to play a role in our findings. That doesn’t mean that our findings are simply invalid or flawed rather, we need to be mindful of these factors and underlying assumptions.

It seems reasonable to view Black women’s concern as more of an experiential one and less of an intellectual endeavour that could be contemplated from afar, given that Black women do live and experience oppression on a daily basis. However, given that institutions such as the church have their own values and ethical agendas, those that refuse to conform to those values and ethical guidelines are likely to be excluded and discriminated against. The obvious example is ideologies in opposition to LGBTQI people.

Collins puts forward dialogues as a method for assessing knowledge claims. Emphasis needs to be placed on extensive dialogues in communities rather than thought in isolation. For Collins, connectedness rather than separation is an essential component of the knowledge validation process. I think, Bakhtin would further agree that the fact that dialogues are missing from the modernist conception of the self reflects the lingering Cartesian residues in our modernist epistemologies. In its desire for epistemological certitude and logical coherence to establish absolute certainty, Western metaphysics roots knowledge in the solitary subject contemplating an external world in a purely cognitive manner as a disembodied observer at the expense of embodied dialogism. It is by adopting a dialogical world view that we are able to assess and evaluate our own existence and construct a coherent self-image. The lack of dialogues in our modernist epistemologies and by extension the metaphysical assumptions of positivist epistemologies further support Collins’s criticism of positivism.

Finally, Collins identifies three key groups that women scholars who want to develop Black feminist thought need to assure in order to be credible. They must be personal advocates for and be willing to engage about their findings with ordinary Black women, they must also be accepted by Black women scholars, and they must be prepared to confront Eurocentric masculinist political and epistemological requirements. There arises a dilemma as the criteria of one groups’ credibility may not necessarily transfer to another. A dilemma, I imagine many Black women in academia experience.

*Collins makes a careful qualification that it is not necessarily individual men that benefit from such institutional structures.

**Collins emphasises that neither all positivist aspects are bad nor all non-positivist frameworks automatically better.