How would you give a talk on Artificial Intelligence (AI) to 120 students between the age of 16-18, not all of whom are necessarily interested or have a background in science? How would you define AI? What would you include (and exclude)? What is the best way to structure it? Well, surely, there are many valid answers to these questions. It was the first time that myself and Elayne Ruane, a colleague who is also a PhD researcher, attempted to give an 80 minute talk to a big crowd of such students. We didn’t find much in terms of guidance or advice on how to interact with the students or how to frame the AI discourse in a suitable manner for students who are about to embark on their college journey. We wanted to convey the excitement, hope and potential the field holds while also portraying a realistic image of its current state. Hopefully sharing our general approach might be helpful to anybody who finds themselves in a similar situation.

Mind, what worked for us might not work in different contexts, mindsets, situations, or for a different topic. AI is one of the most over-hyped and misunderstood areas of research in the minds of the general public. Furthermore, AI has been somewhat associated with a certain stereotypical archetype in the media – a white male genius computer geek. How one introduces the field and the kind of work and influential figures one includes plays a subtle but important role towards challenging these misconceptions and stereotypes. Specifically, when addressing a crowd of young people in the midst of deciding what areas of study they will pursue at university, how you present the field of AI can send implicit signals about who is welcome. For us, this is everyone.

We began our talk with a brief discussion of what a computer science degree, as one of the routes to AI research, entails (within the context of our own department at University College Dublin) and the kinds of careers that it can lead to while raising the point that there isn’t one path to follow. We then briefly talked about exemplar AI projects that are taking place within our own School. We kept this part of the talk very interactive by frequently polling the group by way of raising their hands. This was important in keeping the students engaged.

We discussed the general definition of AI – the common view that artificial intelligence refers to a machine that simulates human intelligence. What it means to ‘simulate’ or ‘human intelligence’ are contested and of course far from settled. However, we felt it was important to keep it simple for the purpose of this talk. ‘Machines that simulate human intelligence and exhibit human behaviour’, often comes down to abilities such as learning, problem solving, reasoning, language processing and the like.

Unlike other disciplines such as physics or biology, Artificial Intelligence is not a clearly defined and well contained discipline but rather a very broad and cross disciplinary endeavour. It draws from mathematics, engineering, biology, neuroscience, linguistics, philosophy, and many more. Although the most direct route to studying AI is through computer science (certainly within the context of UCD), one can also get to AI through other routes. Besides, AI can be synthesized with any field of enquiry, including, neuroscience, music and art. Christie’s recent AI generated art is a good example.

AI is a wide umbrella term with sub-fields including robotics, natural language processing, computer vision, machine learning and deep learning, speech recognition, machine translation and more. We tried to use examples of these relevant to the students including Google Translate, Amazon’s Alexa, PS4 games, Minecraft, facial recognition tools, and robots. We showed them the famous video of Boston Dynamic’s robot, Spot, dancing to Uptown Funk which was a huge hit.

The History of AI

AI is often thought of as a recent development, or worse, as futuristic, something that will happen in the far future. We tend to forget that dreams, aspirations and fascinations with AI go back in history back to antiquity. In this regard, Rene Descartes’s simulacrum and the Mechanical Turk are good examples. Descartes was fond of automata and had a walking and talking clockwork named after his daughter Francine. The machine apparently simulated his daughter, who died of scarlet fever at the age of 5. Similarly, the 18c Hungarian author and inventor Wolfgang von Kempelen created the Mechanical Turk, (a fake) chess-playing and speaking machine to impress the Empress Maria Theresa of Austria.

We can list an endless number of scholars who contributed to the development of AI as it is conceived today. The main towering figures we included were:

We tried to make our talk as interactive as possible. We had questions and discussion points throughout. Towards the end, we had a game where students had to guess whether the AI being described on each slide was ‘sci-fi’ or ‘real’. Here are the main examples. Have a go yourself. 🙂 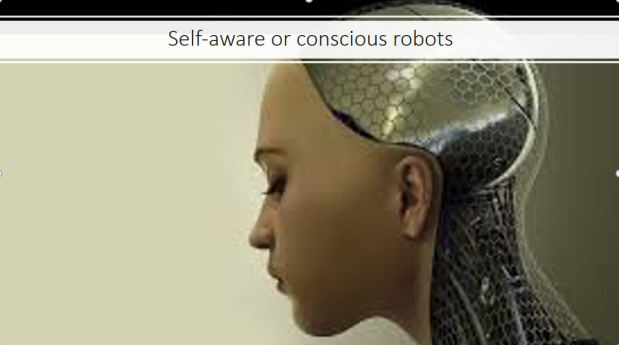 If there is anything that the AI narrative is not short of, it’s hype and misconception. Clarifications, in a subtle way, both help illustrate what the actual current state of the field is as well as highlighting the challenges that arise with it. As such, the final concluding remakes were highlighting the misconceptions surrounding AI and the ethical concerns that necessarily arise with any technological advancement. The major misconceptions we mentioned are: