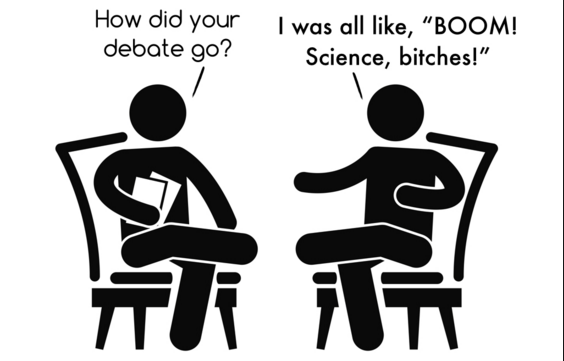 Science is constantly pushing the boundaries as to what can be known and it’s the best available tool we have to produce the most reliable knowledge. Scientifically produced knowledge is often taken as legitimate, objective, unbiased and value-free. A scroll through some scientist’s Twitter posts can show just how much a great deal of scientists make it clear that knowledge that science produces is the ultimate fact. Arguably, knowledge grounded in science is perceived as the ultimate and the most authoritative that others need to aspire to – one that is qualified to legitimately dictate correct from incorrect or right from wrong and considered as the standard against all other forms of knowledge should be measured.

This form of knowledge is often presented in sharp contrast with knowledge that is dogmatic and ideological as if they are neatly separable. Those who are reasonable and educated are seen as free from ideologies and dogmas. Those that attempt to dispute this so called fact are often portrayed as anti-science. Typically snarled at “Don’t take it personal it’s science, can’t argue with the facts”.

Don’t get me wrong! I love science. Science is wonderful and yes, as far as the most consensual way of producing knowledge goes, science may be the best tool we have. However, it’s the idea of scientific knowledge as completely objective, free from any values, ideologies and biases that I object to. There is no such thing as ‘a view from nowhere’ and science and scientists are not immune to this. Science as completely free and separable from ideologies, biases and currently available discourses and a tool by which we objectively discover what is out there is simply naive. Nor is science free from theoretical commitments, or epistemological and ontological assumptions on which experiments are founded.

The methods we choose to investigate (and by implication those we choose to ignore) are central to the kind of knowledge we produce. Such methods are essentially tied to certain underlying theoretical commitments, which are embedded in certain ontological and epistemological assumptions. How something is defined has great influence on what conclusion one arrives at. How scientists analyse and interpret data can greatly be influenced by their preconceived notions. These two studies on sex differences on the brain, arriving at almost opposite conclusions despite having comparable data, shows just that.

Science as a way to establishing facts gets fussier and messier as we move away from the natural sciences and towards studies of human cognition and behaviour. The more socially constructed the concept seems, the more problematic it becomes to make any claims of knowledge as the truth or an established fact. This is evident by the fact that there can be multiple equally plausible theories and research findings explaining certain concepts such as emotions or happiness. Not to mention the difficulties defining these concepts in a manner that scientists agree upon. The very idea of defining the concept or phenomena that scientists are trying to get hold on brings with it associated cultural, historical, and ideological baggage.

We operate within a certain cultural context and are situated in a certain geographical location at a certain time in history where certain ways of practicing science are more acceptable than others. The way we frame how we think about certain things as well as the methods we develop to explore these questions are inseparably tangled with these factors. As well as our historical and cultural past, our own perspective is coloured by our immediate interaction with others around us. The very language we use to formulate our hypothesis predetermines, to some extent, the direction that our research follows. For example, despite the underlying similarities these questions are framed “are you pro-choice?” or “Do you object to the idea of murdering unborn children?” will elicit different responses.

This messy picture of science where the objective and subjective are not neatly separable, makes attempts to develop so called objective approaches with regard to socially constructed behaviours such as criminality questionable. What kind of behaviour is criminal? In which society? At what time? There is no simple and universally defined definition of crime. A brief look at the concept of homosexuality that has developed from being a criminal act to now (for most of the Western society, anyway) as a right, shows how slippery and context dependent the very idea of what counts as a criminal behaviour. Any attempt to understand drug-related crimes, for example, shows how unclear the idea of crime can be – both snorting cocaine and smoking cannabis (in certain parts of the world) being defined as criminal acts, legally speaking .

I am not arguing that all science is biased and that the work scientists have been doing is no use. The point I want to make is that how we come to conceptualise certain phenomena in a certain way but not other does not spring out of nowhere but is inextricably linked to our language, the current dominant theories, current discourses available to us, and our history among other things. Therefore we need to be aware that our science is (implicitly or explicitly) influenced and to some extent determined by these – some fields more than others. And as the scientist is not a robot that is devoid of passion, interests, errors, and biases (which is not necessarily beneficial either as I think some passion and interest in our research is important), the least we can do is acknowledge this and actively question and review whether our views have been clouded by such as well as being mindful of any generalizable claims that we make as objective facts.